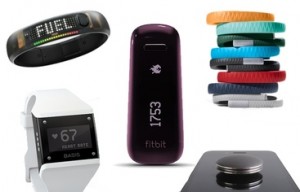 This coming January will mark four years since I started using FitBit’s fitness devices. During that time we have seen the rise (and fall, in some cases) of other wearable tech devices; Apple Watch, Pebble, Microsoft Band (**snicker**), Garmin. While FitBit wasn’t the first company to create a wearable they certainly figured out how to be a catalyst. A couple of weeks ago one of my co-workers told me FitBit wasn’t doing as well. Today I noticed their stock has been steadily declining. Perhaps the era of the wearable has plateaued.

It isn’t a surprise that the wearable tech fad is starting to wane. FitBit did a brilliant job marketing the device and by creating such a successful brand, Apple joined the market. Unfortunately when a corporation like Apple joins the party, they take it to another level. A level FitBit didn’t seem prepared for. The Apple Watch took a fitness device and made it much more functional, however even Apple saw mediocre adoption. Everyone either had a FitBit or a Garmin, or people didn’t want to pay the premium price for a watch. The slow adoption in-and-of-itself is unfortunate because I’ve talked about how much I enjoy my Apple Watch (while still using a FitBit).

What’s Next for Wearable Tech?

I know plenty of people who still use their FitBit but half the people on my friends list have been inactive for quite a while. FitBit’s recent acquisition of Pebble leads me to believe that they are not out of the game yet. My hunch is they will use the Pebble software and design a new FitBit to compete with Garmin and the Apple Watch. In fact I foresee all of the fitness tech companies researching the next modernization in wearable tech. It seems the wearable has plateaued just as your weight-loss can plateau. If you want to keep losing weight you have to make a change (more reps, reduce calories, etc). We have barely tapped the surface of biometrics and biotechnology, so there has to be something new that can be implemented into a wearable.

I hope FitBit pulls out of its downward spiral. I love my Apple Watch and all but I don’t want to lose all that fitness data I’ve accumulated over the past 4 years. These devices can already measure your activity level, your steps, your elevation, your heart rate, our sleep, etc so I imagine finding the next metric is going to be challenging. An article I spotted on CNET leads me to believe that wearable technology still has a future and where it goes next is going to be interesting.

The people who are crazy enough to think they can change the world, are the ones who do
– Steve Jobs