I’m going a different direction for the June Top Five. Let’s direct our attention away from movies this month and talk about books. This could be one of those topics that I could have split into genres. I’ve read a lot of books that span many genres. However, when I sat down to write this post I went with the books that stood out the most in my mind. All the books in the top 5 are books I have read at least more than once.

Most of these books do have corresponding movies, however don’t watch the movie in lieu of reading the book. You will not only cheapen the book but you will also be cheating yourself.

Of course I have some honorable mentions. Animal Farm really needs no explanation. I haven’t read this one in a while but I remember enjoying it a lot back in high school. In fact this book might move up on my re-read list. A Confederacy of Dunces was recommended to me by a stranger in a Barnes and Noble. This book is the reason I’m often inclined to read any recommendation even from a complete stranger.

What are some of your favorite books?

In the spirit of Star Wars month, the May Top 5 is Star Wars themed. I could have taken this many different routes. I actually thought about ranking the top five of the 11 films. While Empire Strikes Back is my favorite, I enjoy the rest of them so equally that it just wouldn’t work. I chose the top 5 Star Wars villains because everyone always picks their favorite Jedi or droid. The villains I selected go beyond the films. There are far more villains than you think when you include the animated and Disney+ series and all the books. So here we go.

There are so many villains to choose from. So much so there are enough for honorable mentions. The first of which is Moff Gideon (from The Mandalorian). He almost made it into the top 5, despite his debut status. The casting of Giancarlo Esposito to portray Moff Gideon is so perfect. The next honorable mention comes from The Clone Wars animated series; Cad Bane. Let’s be honest, bounty hunters are the best part of Star Wars and Cad Bane is among the coolest. I have been a Cad Bane fan since his first appearance in The Clone Wars.

Who are some of your favorite villains from the franchise?

Comedy is probably my favorite genre of movie, and since I have so many favorite comedies I chose the top 5 90s comedy movies for the month of April. In a future Top 5 post I will post 80s comedy movies. I was born in the 80s so many of those films I couldn’t watch until it was well into the 90s. Picking a favorite comedy is tough. A couple of these on the list have sequels. Any move with a sequel is inclusive.

So here they are, in no particular order:

Again, choosing comedies from the 90s is tough. There are so many great movies. In fact there are a few honorable mentions for this Top 5 as well. Office Space definitely deserves mentioning; I’ve worked for a company that almost mimicked this film. I do love the Crocadile Dundee movies but a nice little hidden Paul Hogan gem is Lightning Jack. It’s like Crocadile Dundee in the wild west with a solid performance by Cuba Gooding Jr.

This month I chose the top 5 drama movies. This list is a little easier as drama isn’t really my favorite genre, but there are some great drama movies. I still chose non-franchised movies to make the list easier to filter as well as a few other parameters. The soundtrack plays a big role as well as surprise plot twists and caliber of acting.

I have a couple of honorable mentions for this category as well. The Road to Perdition starring Tom Hanks is really underrated and under appreciated; a wonderful 1930’s mob drama. The King’s Speech (another true story) with superb performances by Colin Firth (as King George VI) and Geoffrey Rush. So there you have it, my top 5 drama movies (as of March 2020).

I am a huge movie buff so picking my favorite top 5 action/adventure movies is very difficult. In fact, in order to even whittle the list down to 5 I have to set some further qualifications. So for this top 5 list I chose movies that are non-franchised. A “non-franchised” is any movie that is not part of a trilogy or large collection of related films (ex: James Bond or the Marvel movies that make up the Infinity Saga). It’s also based on if I were channel surfing and these movies came on, I would be inclined to continue watching without starting over. This list is in no particular order.

I actually want to watch all these movies just merely by building this list. In fact, as I was building this list I felt like a few other movies deserve some honorable mentions (i.e. movies that almost made the list). Chris Evans performance in The Losers is one of the best parts of the film. While I do not care for the type of music DMX performs, his nerdy character is Exit Wounds is my favorite. Finally, The Fifth Element because it’s just a fun movie to watch and it’s quite quotable. 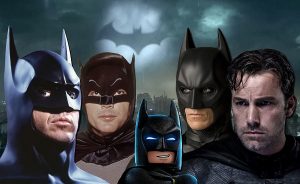 Hokey religions and ancient weapons are no match for a good blaster at your side, kid.