So we are a week into the pre-expansion content patch. The Burning Legion is invading Azeroth, bombarding beloved landmarks with fel fireballs from Legion “Star Destroyers“. Doomsayers are prophesying the “end of days” and dark whispers are turning the innocent into minions of Sargeras. It is time for heroes to return and take on the Burning Legion … again; however this time they will have some more help. The Illidari have come back. The Wardens have released Illidan’s imprisoned Demon Hunters and they are swarming to each faction’s capital cities. Even amidst great sorrow, both the Horde and the Alliance are welcoming their aid in hopes of thwarting Gul’dan once again.

The Burning Legion is Invading 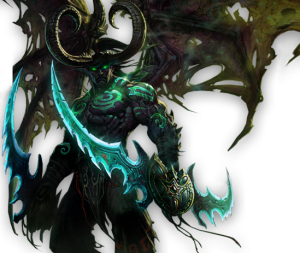 So far this has definitely been one of the more memorable world events leading up to an expansion. It’s kind of reminiscent of Wrath of the Lich King where terror can occur at any moment while in a capital city. I think what sets this world event apart from previous expansions are the invasions. It is really cool to see both factions flock to a location to help defeat the demons invading Azeroth. In the Broken Isles scenario it is also really cool to see both factions with players actively participating in the same scenario. In fact I’d say that is my favorite new mechanic. Can you imagine what ICC would have been like if it used the same mechanic.

If, for whatever reason, you have been avoiding the demon invasions, you are truly missing out. Grab your main, grab your alt, grab your Demon Hunter and go slaughter some demons! The level 700+ gear that drops will definitely make it worth the 15-20 minutes of chaos.

Have you tried playing the Demon Hunter yet? It kind of feels like a Rogue and a Warrior; you build your resource like a warrior and you have the mobility of a rogue. You’re only going to get two talents pre-expansion, but they are still pretty fun to play. It actually makes me excited to level one to 110 just to see what other abilities they will get. I have only tried the Havoc spec, which is their DPS build, and I have seen some pretty successful Vengeance tanking even in a Heroic raid. In my humble opinion they play like the hero class the Death Knight was meant to feel like but “fel” flat (see what I did there). Also, as an avid mount collector, their Felsaber mount looks amazing (I just wish it could fly)!

The “cool factor” of this pre-expansion content doesn’t end with the invasions and the Demon Hunter. If you are a lore junkie then there is plenty here to get your fix. The recent Dalaran/Ulduar/Karazhan quest line will definitely satiate your lore cravings. Try to immerse yourself into the lore and that is where you will begin enjoying the content. I am really excited for this expansion.