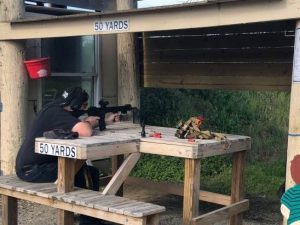 I get to strike something off the old Things To Do Before You Die (TTDBYD) list. Granted I don’t have a “Bucket List” in any official capacity, but I do keep track mentally. I’ve always wanted to go to a shooting range. In fact I’ve thought about purchasing a gun and I’ve even done some research into concealed carry permits.

However, this wasn’t just a typical trip to the shooting range, otherwise it wouldn’t really be a bucket list item. There are different types of guns I’ve always wanted to fire, in a safe and instructor lead environment, and that’s what this opportunity was about. The instructor, from Crusader Tactical, brought quite a few different fire arms for us to try out. As you can see from the photo, the AR-15 is one of them.

Which Firearms Did You Shoot?

As I stated previously, it wouldn’t be much of a bucket list item if I were just shooting a pistol since I have several friends who own one. This experience was unique because of the variety of pistols and rifles available to shoot. I have always wanted to fire a 12 gauge shotgun and an AR-15, and this gave me the opportunity to do that. Here are the firearms we were trained to use and fire safely:

The firearms I enjoyed the most are the Sig Sauer, the Mosberg 12 gauge and the (dreaded) AR-15. The AR-15 is the most infamous weapon in the media today because it’s been used in many horrific acts against innocent people. I can tell you, after firing one, it is not easy to hit a target as a novice. You cannot simply pick up an AR-15 and start picking people off. I never felt like I was in any danger. Guns are only dangerous if you do something stupid, just like driving a car. I goof around a lot but I did not goof around at the shooting range. I didn’t want to feel uncomfortable therefore I didn’t want to put anyone else in a state of discomfort.

How Did It Make You Feel?

A common question I get is whether I was scared or nervous? I was never scared, however I was a bit nervous at the start, perhaps even mildly intimidated. I have never been standing next to someone while they are firing a gun. Also, I have never fired a gun. The honest truth is the more time I spent trying the different firearms, the more comfortable I felt. In fact, it was fun.

After 2 hours, all 5 of us walked away. Still breathing, all limbs in tact, and no holes. I did not walk away with a God complex, thinking I now have the power to chose who lives and who dies. I’m already thinking about when I can go back and do it again. In fact, the next time I go back, it might be for the 8 hour safety and training course required for a CCW. Actually, I might be going back to fire my own gun as I definitely want to purchase a pistol (perhaps a Sig Sauer). While shooting the rifles is a lot of fun, I don’t feel the need to own any rifles at this time. Although … I do have a daughter; the sound of pumping a 12 gauge shotgun might be useful around the dating age. 😈