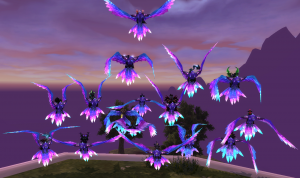 This year marks the 25th anniversary of Blizzard Entertainment and the 15th anniversary for World of Warcraft. I have been playing video games since the first Nintendo. Of course Internet didn’t exist back then but we managed to still make it a friends and family activity. As technology evolved so did the world of gaming. Consoles added online, multiplayer modes. PC games added multiplayer mode, which initially became popular in First Person Shooters. I spent many nights in college playing multiplayer Half Life.

Then the MMORPG was born. In my youth, an RPG required a few friends, paper, pencils, dice and some incredible imagination. Then Blizzard created World of Warcraft, which was an evolution from their Warcraft series of games (my favorite being Warcraft III). WoW united us all by breaking down borders, cultural and political divides. I realize that last item isn’t always true, but if you find the right kind of people, everyone can agree to leave that topic alone.

Now the world is so different.

I know I’ve talked about this before. You can have friends you haven’t met in person. Twenty years ago the only friends you had are the ones you met in school or at work. Oftentimes people outside the gaming subculture tend to think having “online friends” seems absurd. How can you be friends with someone you’ve never met face-to-face? Our physical locations cannot limit the things we have in common with people.

A friend of mine (a gaming friend) once said “friends are the family you get to choose”. This is true. I’ve had disagreements with friends just as I do with family. I also get along with my friends just as I do with family. While I have not met all my online friends in person, I have met a few. In fact some have even been to my house and I’ve even had one live with me for a year. I hope to meet more of them one day. Today I am just as good of friends with people I’ve never physically met as I was with friends I had in high school.

Blizzard has created a huge community. Larger than any community I’ve ever known. I’m grateful for the friendships this game has given me.

A Tribute to Our Maharajah