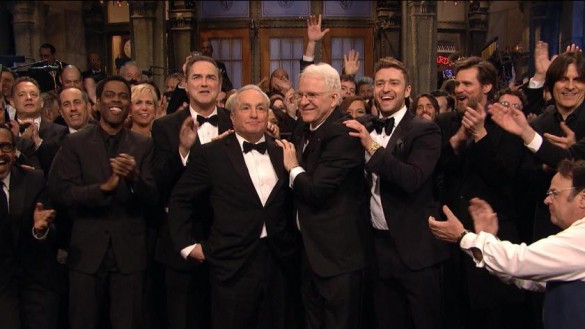 February 15, 2015 a three and a half hour comedy special aired to celebrate 40 years of Saturday Night Live! I actually remember watching the episode that celebrated 25 years. It was really great to see so many great actors and comedians return to the studio and reprise some of SNL’s most classic characters. I think the Wayne’s World skit that provided a Top Ten list of what’s great about SNL nailed everything that truly is great about SNL. Here is the YouTube video of that skit, if you didn’t see it:

Oh Kanye, I’m so glad you can laugh at yourself for your ridiculous antics during awards shows. I doubt Beyonce enjoys the negative publicity. I also did not enjoy your bizarre “musical” performance on SNL 40. In fact I didn’t really enjoy Miley Cyrus’ performance either. Actually, I hate to say it but Paul McCartney’s performance was painful to watch. His voice isn’t what it used to be and sounds worse at 72 than Frank Sinatra’s did at 80. The musical performances were probably the biggest downside of the celebration, which is unfortunate because SNL has always had some amazing musical talent.

I realize that this post is a couple weeks behind and I almost deleted it, but SNL has been such a pop culture staple for the past 40 years that I couldn’t bail on the post. I hope by now you have watched the 40th anniversary episode, and if you haven’t then you need to as soon as you can. The show did have its peaks and valleys. It really depended on how talented the cast was. It’s obvious when the show was at its peak because it usually created so many amazing careers. We probably wouldn’t have had the Jimmy Fallons, Tina Feys, David Spades or Chris Farleys without Saturday Night Live.

Speaking of Chris Farley, I really enjoyed the montage dedicated to those SNL icons that have passed away and it really shows how close the cast and crew are when writers, cameramen and other crew members are included in the same montage as John Belushi, Phil Hartman and Gilda Radner. I am a little surprised that Robin Williams wasn’t mentioned but I can’t remember if he had ever been on SNL. I included a link to the SNL 40 In Memoriam Tribute, so check it out when you get a chance.

I know there will never be another show like it so I hope it sticks around for at least another 10 years so we can celebrate 50 years of amazing satirical humor and extraordinary comedic talent.

Related articles across the web