I know I talked about a few tech projects I have going on in my little computer lab at home. I mentioned that I was going to do a write-up on each of those projects upon their completion. I haven’t completed any of them yet, much to my chagrin; but that doesn’t mean they won’t be completed. Thus why I decided to provide a little update.

All the wiring has been completed for phase one of installing my in home network. I have installed 3 drop locations. One location has 6 drops which will be for the entertainment center. We will be able to plug the XBox, Blu-ray player, TV (if it can have a hardline) and any other internet capable equipment (such as the MythTV box) directly into the network. A second location has 4 drops and this will be for the computers. The third location will be for the Samsung SmartThings hub and the printer. The wireless router we bought has a USB plug that allows computers on the same network to print to a printer. We used a USB-to-CAT 6 adapter to allow the printer to sit in a different location other than next to the router.

Phase two of this project will be to eventually run CAT 6 to the second floor so each bedroom can have a network drop. Since we will need more ports in the switch and patch panel, we went ahead and bought a 24 port patch panel and switch for this phase of the project. This phase has an unknown start date.

Speaking of MythTV, we have made some progress. It turns out that if we put an HD antennae in the right location we can get quite a few channels. I have MythTV successfully recording shows from the HD antennae in 720p. I have also successfully installed FreeNAS and set up appropriate shares for the different types of media. I have not tested whether these shares can be accessed from other computers. I’ve run out of ports on the wireless router so configuring the shares to be accessible will have to wait until we finish the work in the basement and plug everything into the switch.

I haven’t made a lot of progress with Plex yet. I think a lot of my hangs are coming from the fact that some of the computers are plugged into the router and the NAS is plugged into the modem (which essentially means its on a different network). I know Plex can do everything that I want it to do (if only there was a way to allow it to play digital movies that I have codes for). I will go into more detail on this project once I’ve completed the full implementation.

As I mentioned above we have a Samsung SmartThings hub that came with a few appliances for automating different parts of the house. We need a live Internet connection to begin working on implementing SmartThings so we haven’t really made any progress since its dependent on finishing the basement and hooking everything up to the internal network. The same goes with my Raspberry Pi, the one thing I am most excited to play around with, however, all the other projects have taken precedence over wiring up the Raspberry Pi. It hasn’t kept me from still working on what I want to do with it once I get the other things done.

I’ve thought about integrating it with the SmartThings home automation system. I know I can grab some arduino sensors. I’ve also heard of some people turning it into a mini gaming console that can play old arcade games. I’ve also found some libraries that will send data to the cloud, like Azure. The Internet of Things is a big trend these days and Raspberry Pi is right in the middle of it. I hope I can jump on board while it’s still cool.

Click the “Continue Reading” link below to see a couple of pictures as proof that I haven’t been a slacker! 🙂 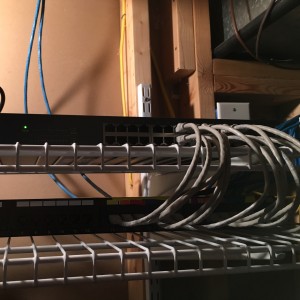 Switch and Patch Panel are connected, ready for the modem. 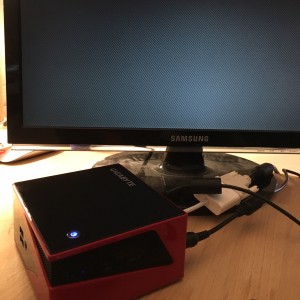 The MythTV box booting for the first time.